Following in the footsteps of Jean-Dujardin and Hélène Darroze, this year we have a VIP guest for you. Like many of you, Pulpe supports the Union Bordeaux Bègles rugby team all year long and we were lucky enough to spend some quality time with one of the team’s trainers and former French rugby player: Jean-Baptiste Poux. “A tale of places and people”, what you see is what you get and what you get is a local lad ;) 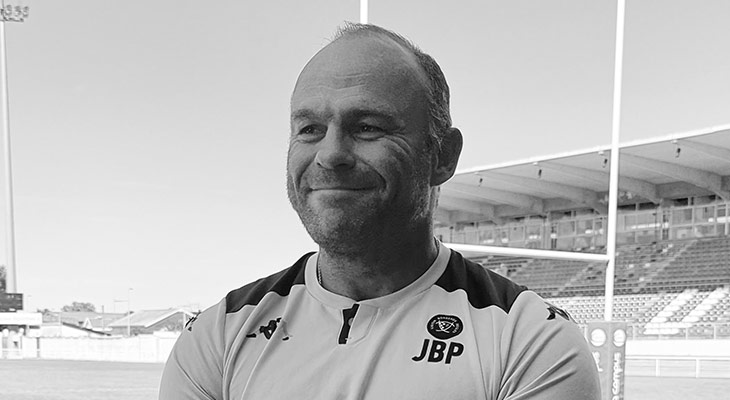 Pulpe: Hi Jean-Baptiste and welcome to Pulpe!  Can you introduce yourself and tell us about your current role at Union Bordeaux-Bègles?

I come from Béziers in the Hérault area and started my professional career playing for Narbonne. Then I went to Toulouse and we won several championships (European champions in 2003 and 2005). I was picked for the French team in 2001 and was lucky enough to win the Grand Slam the following year. I’ve had an action-packed career as a player!  I ended my time at UBB and played for the team for 5 seasons. This is where I opened a new chapter of my life as part of the admin team: I’m the assistant coach for the forwards and mainly handle scrums.

P: It’s been an incredible year for UBB. What’s your take on it? Take note readers, at the time of writing, everything’s to play for!

That’s right, it’s still all to play for: we’ve had highs and lows but this is crunch time. The end of the season is the time to put our cards on the table and prove how much work our team and players have put in. We’ve grafted to get to this point: the last matches will change everything. It’s exciting. I can tell the team is ready for what’s coming up.

P: We bet! We’re big UBB fans but we’re big wine fans too. How about you?

Yes, I’ve been a wine connoisseur for a long time. My parents had vineyards near Béziers and I used to work there with the family when I was young… A few years ago I launched a wine export business with my Norwegian wife to introduce French vintages to Norway. Unfortunately the pandemic put our business to an end. But it’s still a passion for me. It’s always a joy, especially here! We’re in the right place to drink fine wine and visit beautiful châteaux in the region. I have a few friends working in the industry and I always love sharing these vineyard experiences with them. Rugby and wine have a lot in common, especially seeing as South Western France is famous for both.

P: What do you like about the Bordeaux vineyard?

The variety of designations. They all have their own unique features. And I love trying new things, sampling new flavours, listening to stories. Wine is all about a region and the people living there. I should mention that I love my homeland’s wine too (the South of France makes great wine)!

P: If you were offered a flight in a small aircraft over the vineyard or a mindful tasting session after a yoga class, which would you choose?

Woah! Yoga isn’t my thing. Wine and food go together for me. I prefer tastings with good food and good ingredients. The rugby world is very social, we love getting together after matches and training… But not all the time! Remember, we have high standards to achieve all year round. That means it’s even more fun when we get together for a good meal.

P: The Rugby League World Cup is coming soon (editor’s note: October 2022) but it’s not that well-known in France. What’s your take on it?

Rugby league is fairly popular in Occitanie and there’s a club in Perpignan. I don’t know if people are going to get caught up in it but I think it’s a big thing. A World Cup is never just by-the-by. UBB will be part of the event as the French team is training at our centre. I’m a rugby fan so I won’t be missing any of the matches, that’s for sure!

P: Do you sometimes work in rugby league?

No, but we’ve got more in common than we used to. Some things, like the attacks, are completely different but there are similarities. Both sides have the same clash between positions, it’s fascinating.

P: How did you feel when you went from player to coach?

P: What’s the mood like in the Bordeaux-Bègles team?

It’s a good bunch with good vibes, everyone has their own personality but it’s like a big family. It’s important that we hang onto that. Everyone rubs shoulders at the training centre in Bègles, staff, administration, players etc. I’m part of a real team, thirty of us work with the players. Christophe Urios runs the show with flair: he brings the best out of individuals to lead us to victory. There’s no “I” in “team”.

Thank you Jean-Baptiste. Come on UBB, we’re keeping everything crossed.