After a brief moment of doubt between Bordeaux and Var, Kelly and Elian decided to settle in Médoc to bring their dreams to life. It was well worth the risk. The two history buffs now run an eye-popping B&B packed with antique furniture, period paintings and contemporary pieces. A real gem tucked away in the little village of Saint-Seurin-de-Cadourne. Interview with Kelly, the bubbly and passionate owner of Château Réal. 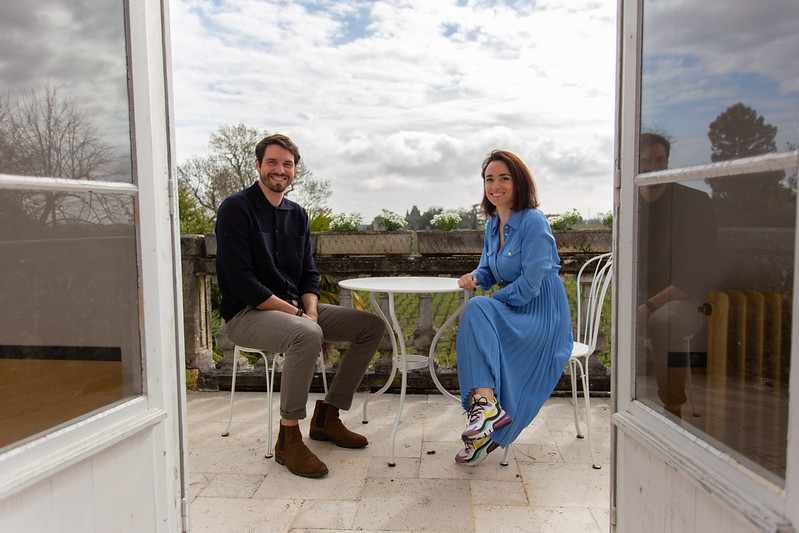 A love story… and a family saga

The 1800 building was designed by one of Napoleon’s high-ranking soldiers, Monsieur Réal, who had this beautiful mansion built to seduce a lady: how romantic! Unfortunately the woman in question never set foot inside… Money isn’t everything after all. He sold it thirty years later to the Tronquoy family (from Tronquoy-Lalande in Saint-Estèphe) who planted vines here: the mansion became Château Réal and was in the family for 220 years. The vines may have gone but it’s still a family home. Kelly and Elian moved in with their 6 month old son in January 2020. The family adventure began: Elian oversaw the demolition and Kelly took care of their son whilst drawing up plans and handling orders for material. 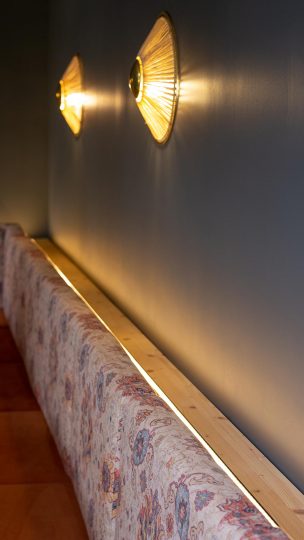 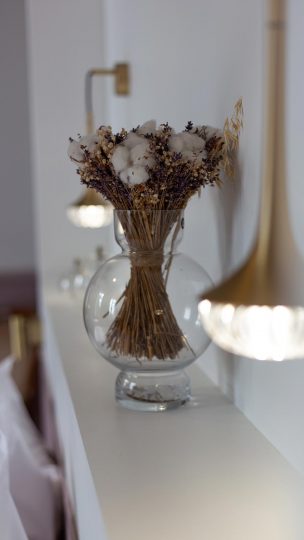 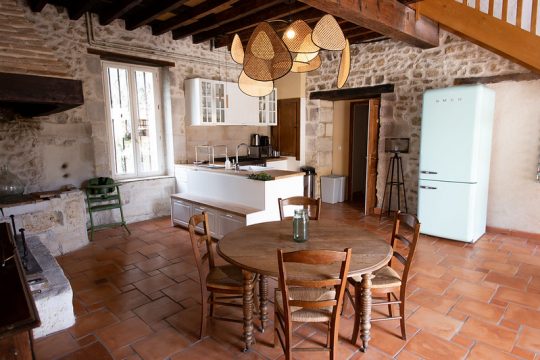 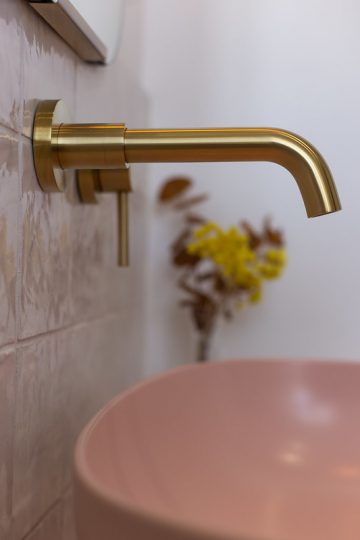 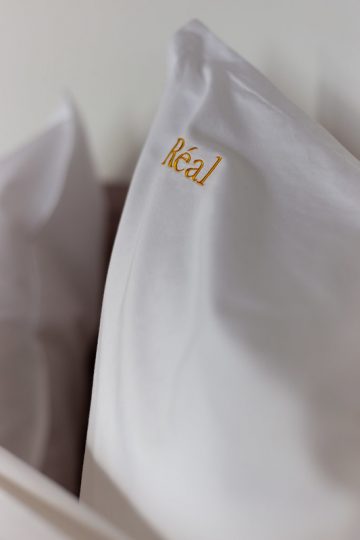 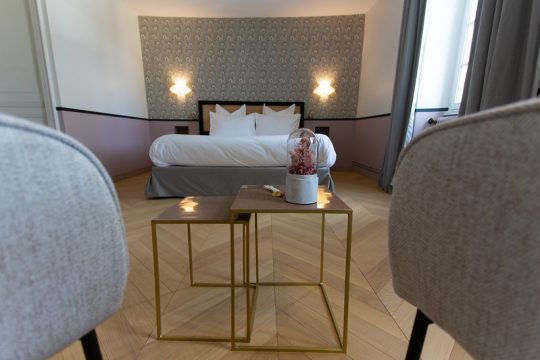 When you get here, you’re instantly hit by the fabulous crystal chandelier that takes centre stage in the hallway: “I think it’s my favourite piece. We picked it up at a car boot sale in the village whilst the building work was going on. We see it as a key feature of the house and we don’t regret it!” As you explore more, you’ll be won over by the two 1900 hand-painted ceilings painted by the village church’s restorer who stayed at Château Réal. “Our interior design was all about holding onto the original features, ceilings, mouldings, fireplaces, everything that makes the place so magical but with a contemporary touch to bring the past and present together. I have a real love for interior design so I could unleash my imagination on it. My husband’s the same: we both wanted to be architects when we were kids.” Their childhood dreams became a reality with a bit of courage and willpower. 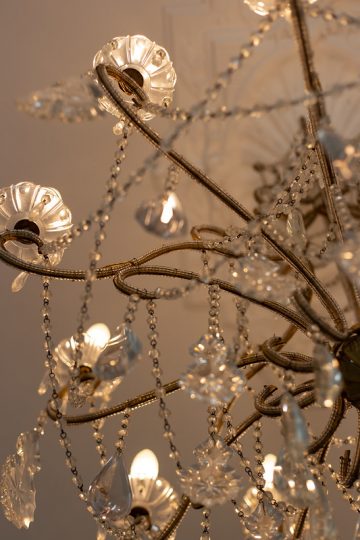 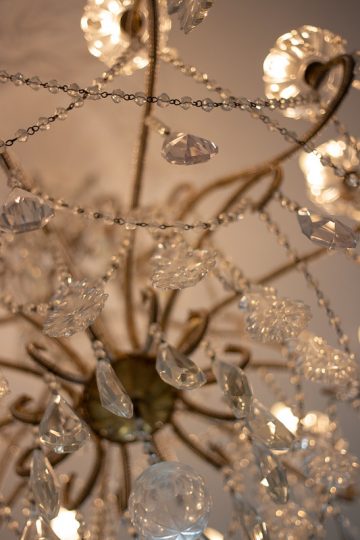 “The dining room. The idea was to create a cosy room where you feel at home in summer and winter. People have a drink here, work… It’s the house’s Swiss knife. We use it for all kinds of things but people enjoy spending time in here. In terms of design, we had to match the ceiling colours with the furniture. For example, we brought in a Bordeaux upholsterer, Feliz Tapissier, who worked with a carpenter, Thomas Trabuc, to make a bespoke sofa. In a nod to our past life, we bought the same little tables you tend to find in Parisian cafés.” 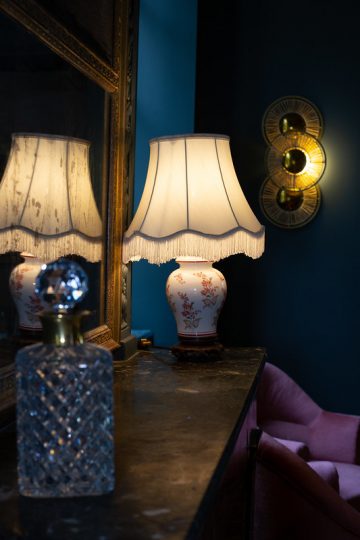 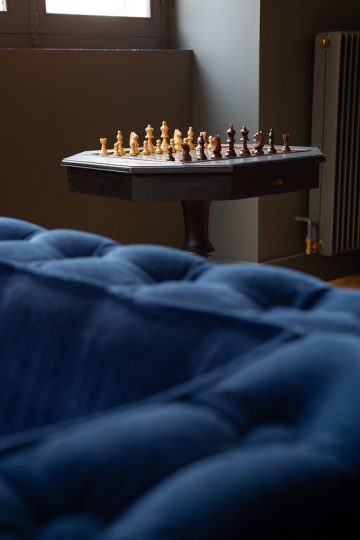 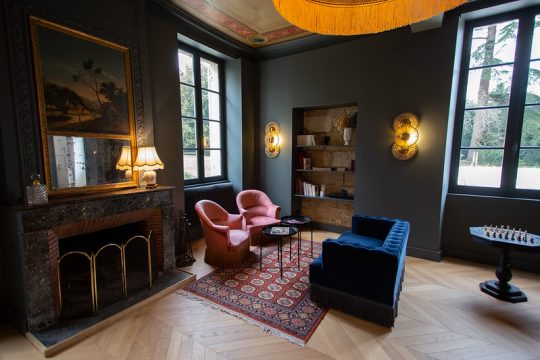 “Baby number 2 is on the way so that will keep us busy (laughs). We recently expanded our catering side with cheese and meat platters. Our menu features quality, organic and local produce where possible but we want to do more with tasting workshops in the château wine cellar and bringing in winemakers from nearby wineries. There’s still lots to do: we’d like to have a brasserie, hens, hives…”

You’ve got it, the tale of Château Réal has only just begun!